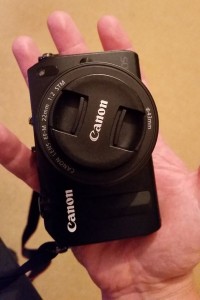 If you fancied a Canon EOS-M when it first came out in the UK just 2 years ago, you’d have forked out a hefty £770.

From launch, the EOS reviews were very mixed – the lenses were really great, the feature set good, the IQ decent, but the focusing time absolutely shocking. As a result, it totally slipped off the radar and last week I bought one for £199 at Argos (it came with an 18-55 STM kit lens, and Speedlite 90EX).

In recent months Canon have launched the M2 but not in Europe, and released new firmware that dramatically speeds up the autofocus. I’ve now had the chance to use one for a week or so and here are my initial thoughts.

+ From a sensor and IQ perspective it’s exactly the same as my 650d, which is a great little camera
+ Touch screen – takes some getting used to but it’s brilliant when you do. I still maintain that even the pro-level cameras will have touch within the next 4 years.
+ It’s absolutely tiny. Just look at it.
+ Despite its size, with a £30 adaptor from Amazon I can use it with every single one of my normal Canon lenses (it looks a little odd with a 70-300L on it). It’s like a spare Canon body that’s no bigger than a wallet.
+ The lenses are really great, but due to the poor initial sales you can pick them up for a song. I got the awesome 22mm f/2 STM lens for just £75 brand new on Ebay. It sold for £230 just 2 years ago.
+ The build quality is great – all metal with a beautiful finish
+ It’s £200 for an 18mb ‘mini SLR’!

– Oh god, it’s horrible not having an optical viewfinder. The LCD screen is great, and I’m sure I’ll get used to it but it just feels wrong and I feel out of control
– Even if the AF is zipped up it’s still slower than you’d like.
– There’s no way on earth you could describe this as a primary camera for an enthusiast. It’s got far too many quirks and frustrations.
– Battery life’s not great (though again you can pick up spare batteries cheap on ebay)
– It’s hit or miss – whilst in theory you can get great shots, you need patience or for the shots to not be critical if you miss them. 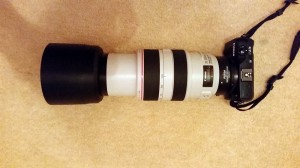 In general, my views are that this is one hell of a Marmite camera. There are times when I absolutely love it and think it’s the coolest thing ever. Times when I want to throw it into a ditch.

However after a week of using it I’ve decided that – for ME and what I do – it’s going to be a hell of a lot of fun. It’s so blooming tiny I really can take it anywhere. If I’m going out for a long cycle I can shove it in a small saddlebag – I’d never dream of taking my 6d or 100x in circumstances like that. Even if I take my whole ‘kit’ (camera, 18-55, 22mm f2, flash) I’d struggle to make it take up more space than a large book. And if you want to take a tripod with you, you only need the smallest size Gorillapod.

In short, I’ll find myself in places I’d never normally have that ‘level’ of camera just because it’s so portable and because being small and relatively inexpensive you’ll use it in situations where you wouldn’t wave your DSLR about (sandy beaches etc). I’ll miss a lot of shots, and I find the absence of viewfinder really frustrating, but at the end of the day I’ll get shots I wouldn’t have got.

Also, if you stick Magic Lantern (a free 3rd party firmware on it) it’s absolutely amazing for video. 4k raw footage, with stepper lenses for smooth focusing. It’s a better video camera than some of the specialist kit we use at work that costs 3x the price.

The other interesting fact for me is that the lenses are really great, but the prices are so low because of poor demand. If Canon make an EOS-M3 (and I’m sure they will) then those prices will skyrocket again.

So – in short – consider with care. It’s not for everyone. On the plus side, it’s so small that if you do end up kicking it into a ditch you’re unlikely hurt your toe.