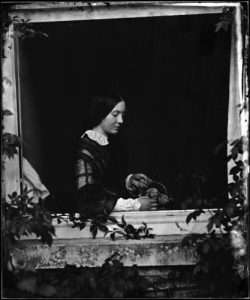 Big thanks to last night’s speaker, Rachel Nordstrom, photographic collection manager at St Andrews University, for her insightful talk focusing on the origins of photography in Scotland.

Her talk focused especially on the Rossie Priory Glass Plate Negative Collection acquired by the university in 2014 from an auction house in Yonkers, New York. The archive features items in approximately half of 71 albums and 2 boxes of loose early material.

As noted by the University of St Andrews Special Collections site, St Andrews was an epicentre for early photography:

Largely because of the enthusiasm of Sir David Brewster (then Principal of the United College of St Andrews University) and his acquaintance with William Henry Fox Talbot, who announced his invention of the negative-positive photographic process in early 1839, St Andrews became a key site for pioneering work in the development of photography. Brewster (1781-1868) had been corresponding with Fox Talbot since his introduction to him in 1826 by the astronomer Sir John Herschel. The Literary and Philosophical Society of St Andrews was founded in 1838, an association of university and professional men, to whom Brewster, as Vice-President, exhibited the frequent examples he received of Talbot’s latest experiments in photography. By 1841 a group of enthusiastic photographers was active in St Andrews and Brewster, along with Dr John Adamson, Hugh Lyon Playfair and other citizens of St Andrews were producing Daguerreotypes and attempting to replicate Talbot’s process of producing ‘calotypes’.

To see all of the images from the Rossie Collection, visit the St Andrews University special collections website.